Autumn has been approaching swiftly in Paris. The trees around the Eiffel Tower flaunt their changing colours, and from time to time the overcast sky blesses us with a shower of rain.

The very special atmosphere reigning in the city makes for beautiful and unique photoshoots at the Eiffel Tower.

Paris in autumn: the Eiffel Tower’s always worth the trip 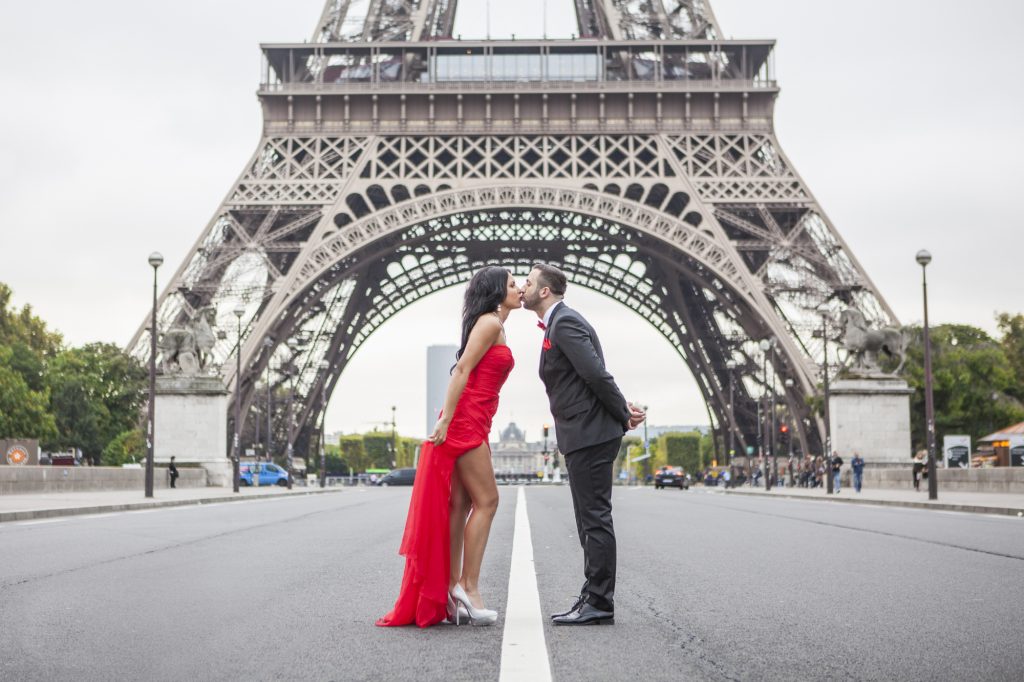 My last photoshoot in Paris was with a couple dressed in red. Even though it’s autumn, there’s no need to pack your wintercoat for your photoshoot at the Eiffel Tower. With temperatures at around 15 degrees Celsius, you may even decide to surprise your photographer by dressing up in your best red evening dress! And boy, was I surprised when Bana and Asti, young couple from Germany, hopped out of a taxi at the Place du Trocadero dressed to the nines. Having a photoshoot in Paris was one of the items on their bucket list. 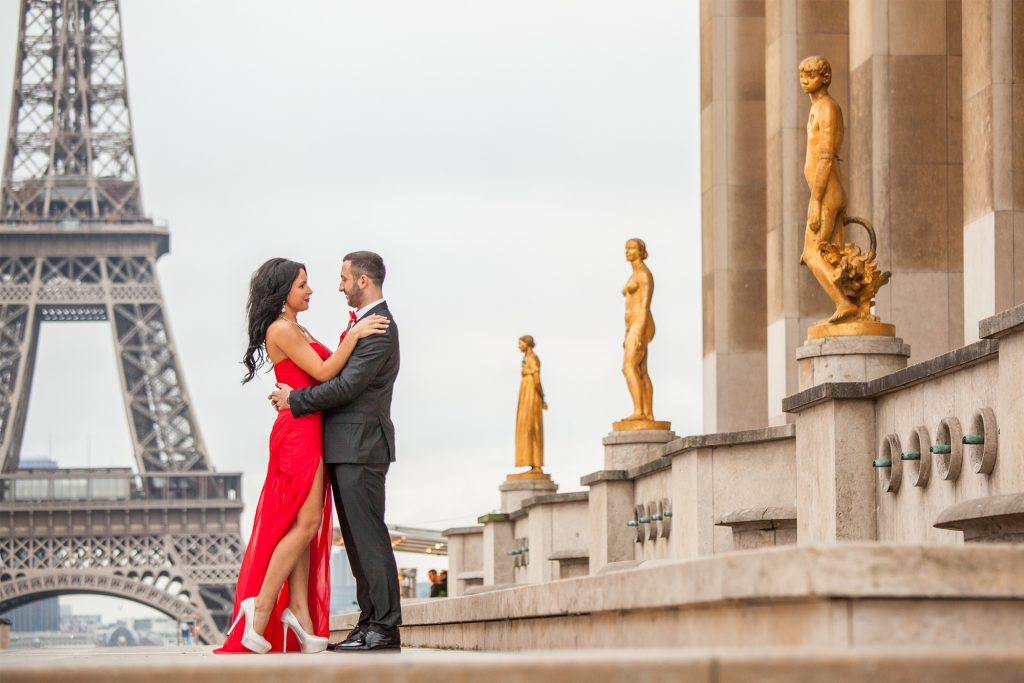 Bana and Asti definitely made the right choice. Now all that was left was for their photographer to set the scene and to put them in the limelight. A photographer in Paris needs to know the right time and the right place to take the best pictures at the Eiffel Tower. There’s only about a 30 minute window a day that makes for really great pictures at the Eiffel Tower, which is why it’s important to plan a photoshoot correctly. Bana and Asti made their way to the first location of the photoshoot, the Place du Trocadero, in a taxi, and they were ready for the photoshoot before the photographer was even able to get his bearings and unpack his gear. 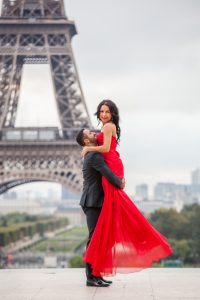 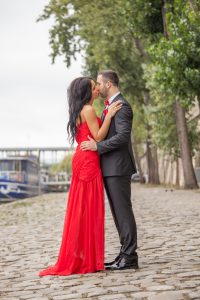 Photoshoot at the Eiffel Tower: an overview 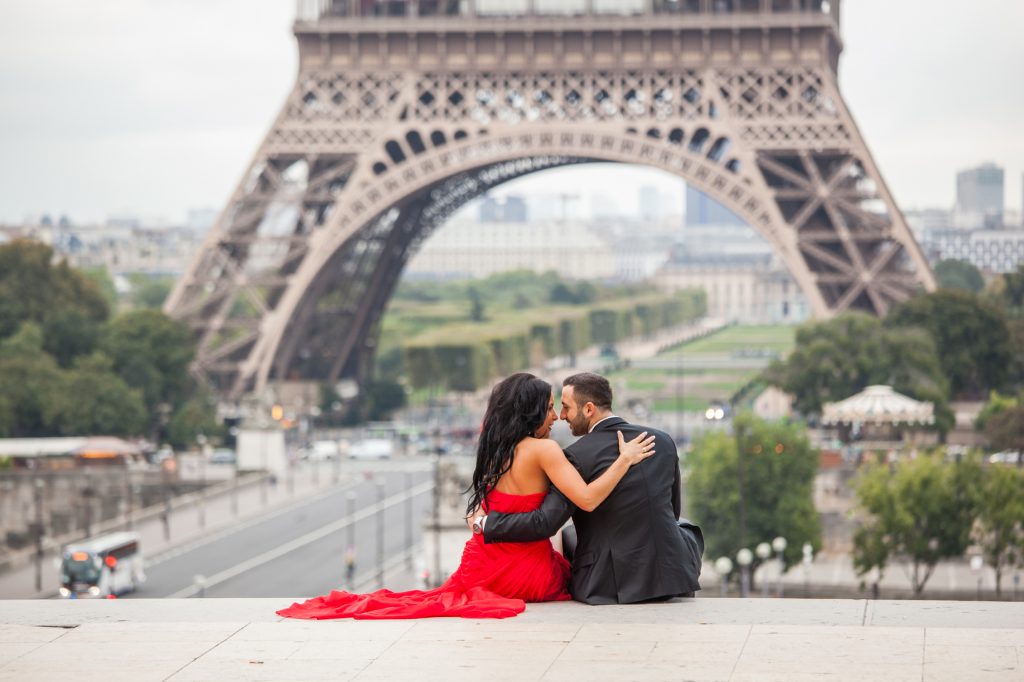 The first to locations of the photoshoot, the Esplanade du Trocadéro and the Jardins du Trocadéro are well-known among photographers in Paris. Sadly, right now the view is obstructed by an ugly construction site. There’s one location at the Plac du Trocadéro that’s still available for photoshoots, but it’s overrun with people. A photographer without experience might despair in these conditions; there’s no time to try different angles to find the best one. 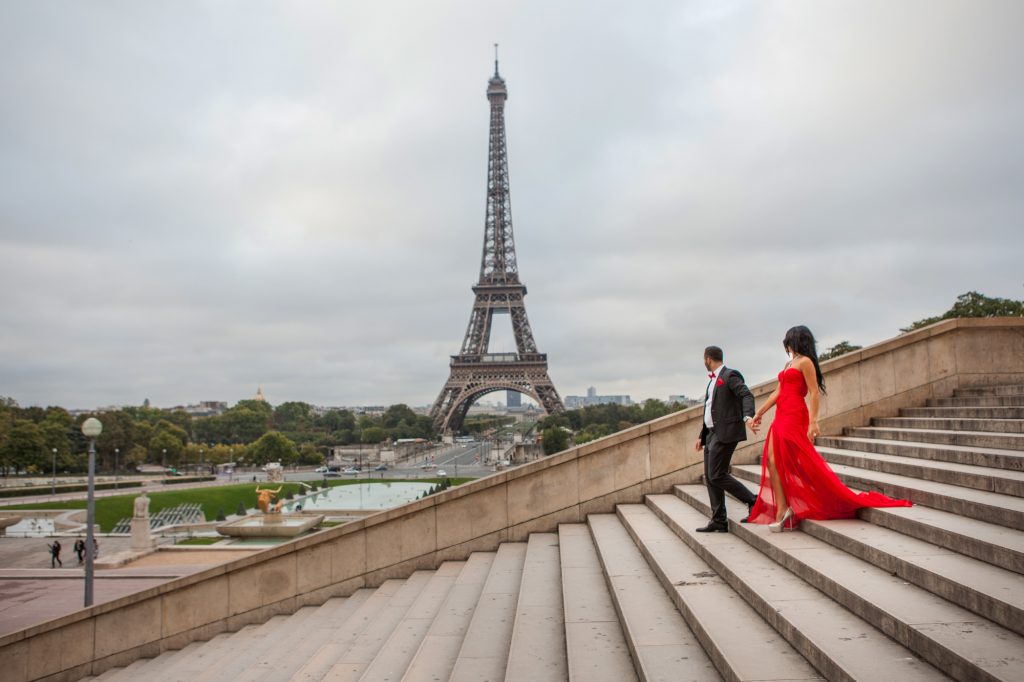 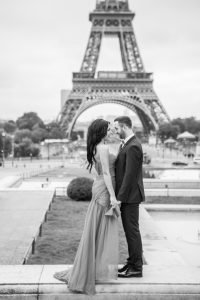 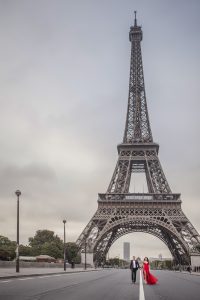 We take some pictures at the fountains of the Trocadéro as tourists begin making their way through the Jardins du Trocadéro to the Eiffel Tower.

Then we walk onto the Pont d’Iena for some action shots. The Eiffel Tower looks amazing from this angle. Not every photographer has realized the potential of this vista, but maybe they’re just scared of being run over.

That Sunday morning, Bana and Asti had the street to themselves. Isn’t the view of the Eiffel Tower from this angle breathtaking? 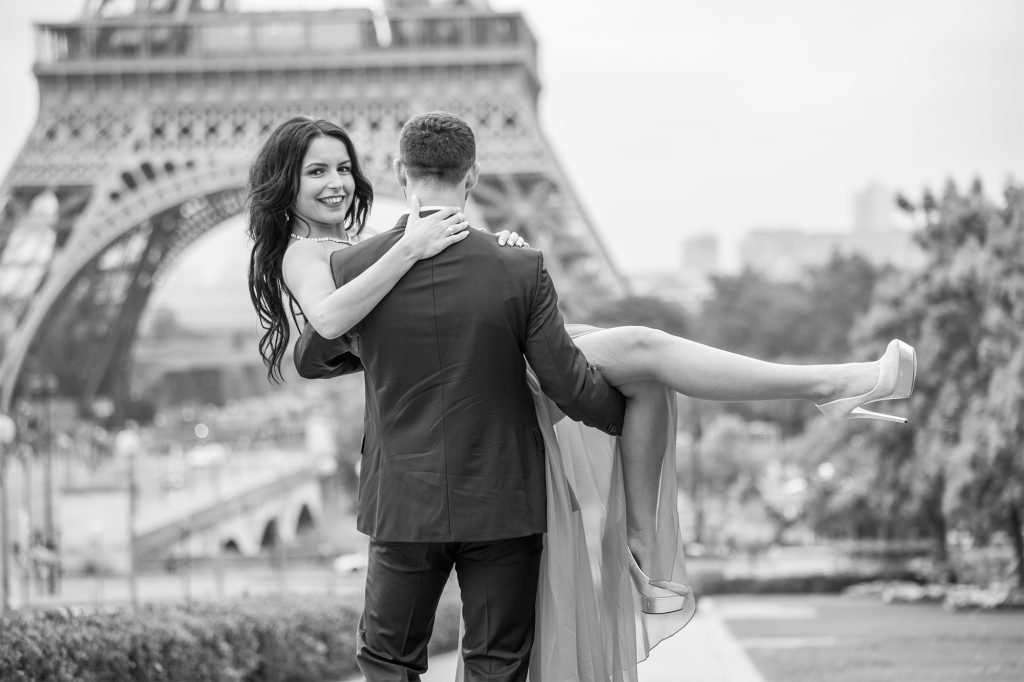 Romantic photos on the banks of the Seine

We are all but alone on the banks of the Seine. We share the cobblestones with some fishermen, and I only now realize how well Bana can walk with her high heels: the cobblestones don’t even pose a real challenge to her.

Trying not to fall into the river, we make our way along the banks of the Seine, stopping by some house boats. We leave the Eiffel Tower behind us as the famous Pont de Bir-Hakeim looms before us. 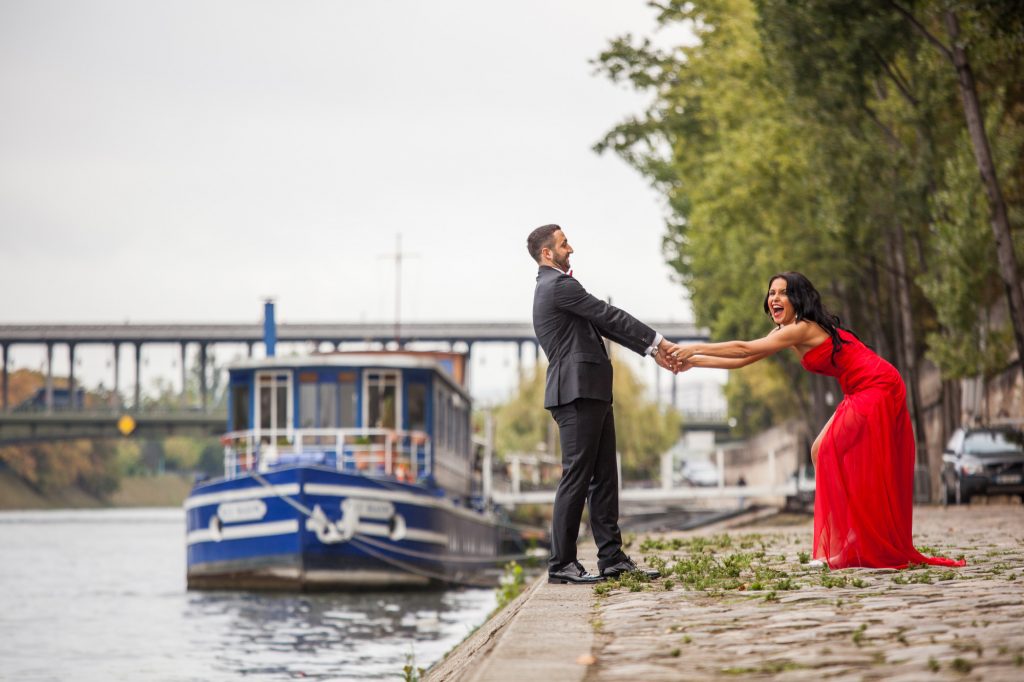 The Pont de Bir-Hakeim has been used in many commercials

L’Oréal, the Galeries Lafayette Haussmann, and many other famous brands have used the Pont de Bir-Hakeim for their commercials. This time it’s time for a young couple from Germany, Bana and Asti, to leave their mark! We reach the bridge by the way of the banks of the Seine. 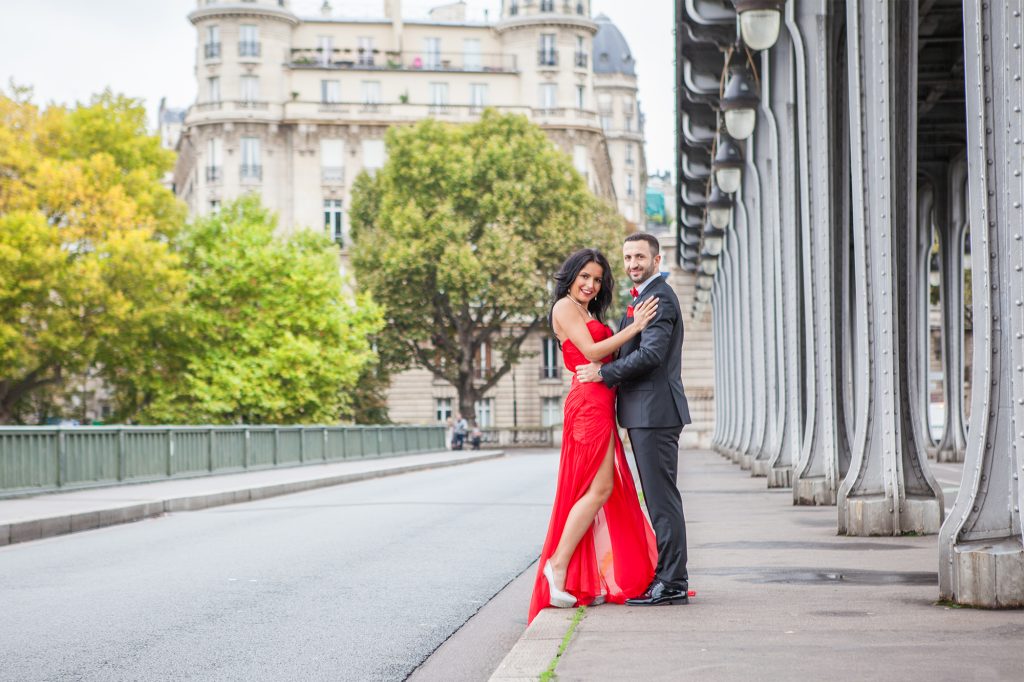 As a photographer in Paris, I always do my best to make you shine. I’d almost call this photo something worth of a glamour magazine. Parisian romance meets the steel construction of the Pont de Bir-Hakeim. 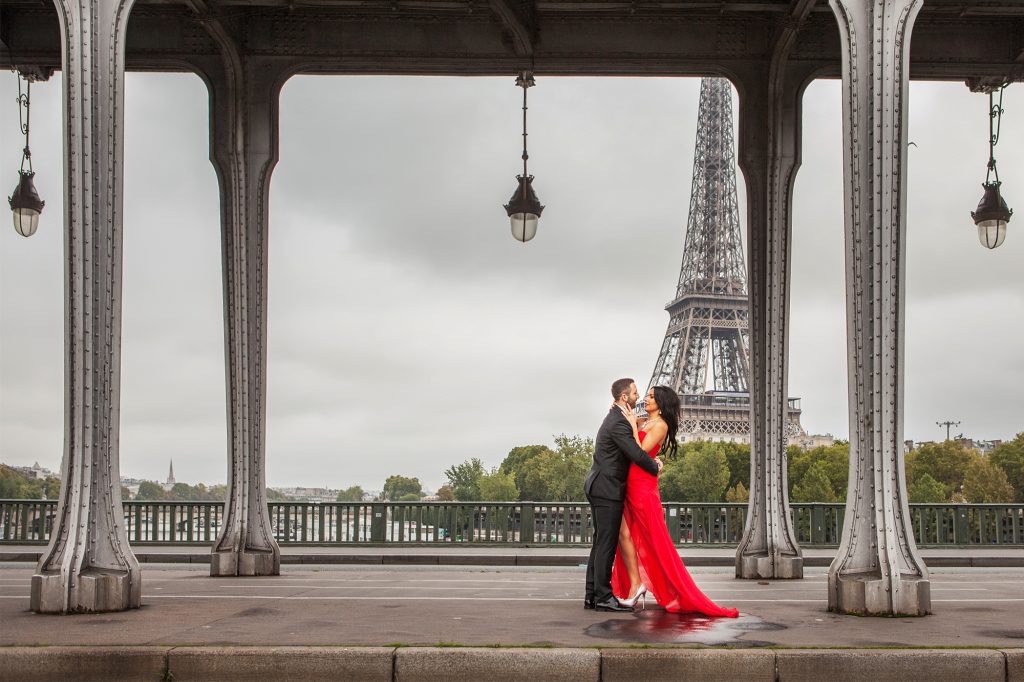 As a professional photographer, it’s important for me that my photoshoots are fun for everyone. Asti proves his talent for jumping photos. He’s a soccer player, and is giving Bana a hard time keeping him grounded. 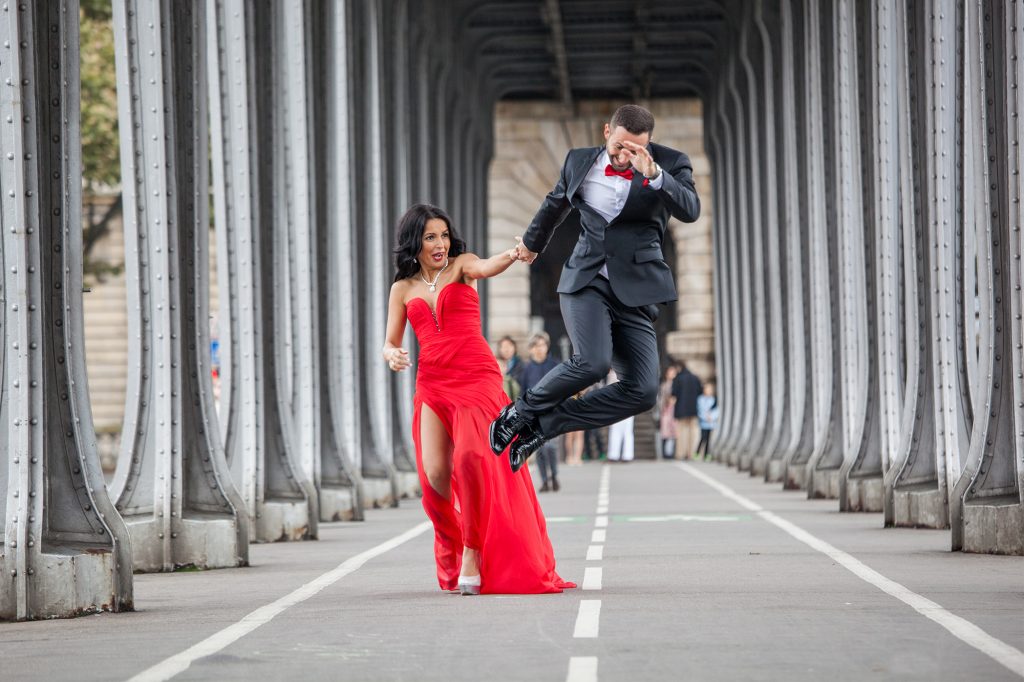 It was a great morning in Paris, filled with unforgettable moments. I took almost 300 pictures, and even for a photographer it’s hard to choose favourites. I could show you 100 more pictures of Bana and Asti on my website, but I think these images speak for themselves!

All things come to an end, even photoshoots in Paris

If you’re looking for a photographer in Paris for a professional photoshoot, look no further! You can contact me via e-mail or directly on my website. I’d also love to hear from you in the comments! 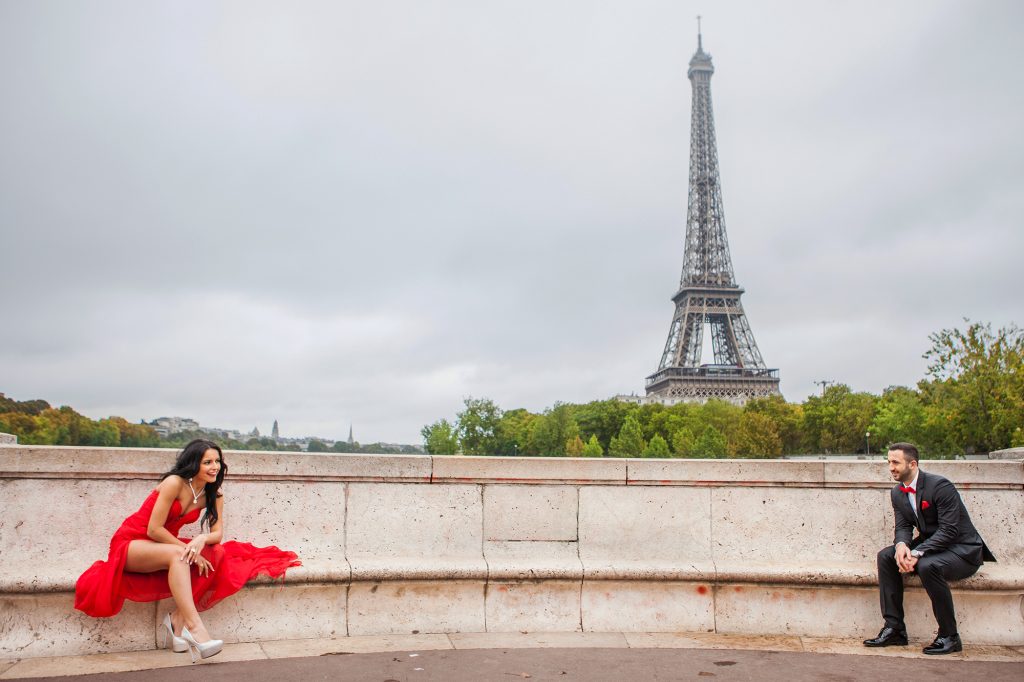